When you think of Andalusia, you may think Flamenco, tapas, Seville or Granada but I doubt fun in the snow comes to mind. But did you know that the South of Spain has much more to offer than beaches, sun, sand and sea?

The Sierra Nevada mountains in Spain are in my backyard and they are not only a wonderful place for all-year walking and hiking, trekking and wild camping but in winter the mountain range provides for all sorts of activities in the snow. Skiing, snow shoeing, mountaineering and general fun in the mountains. If you stay away from the commercial ski slopes of the Granada ski resorts you are very likely to be the first one to take steps on fresh crisp snow. Off the beaten track and undiscovered means you will most probably have the place to yourself. 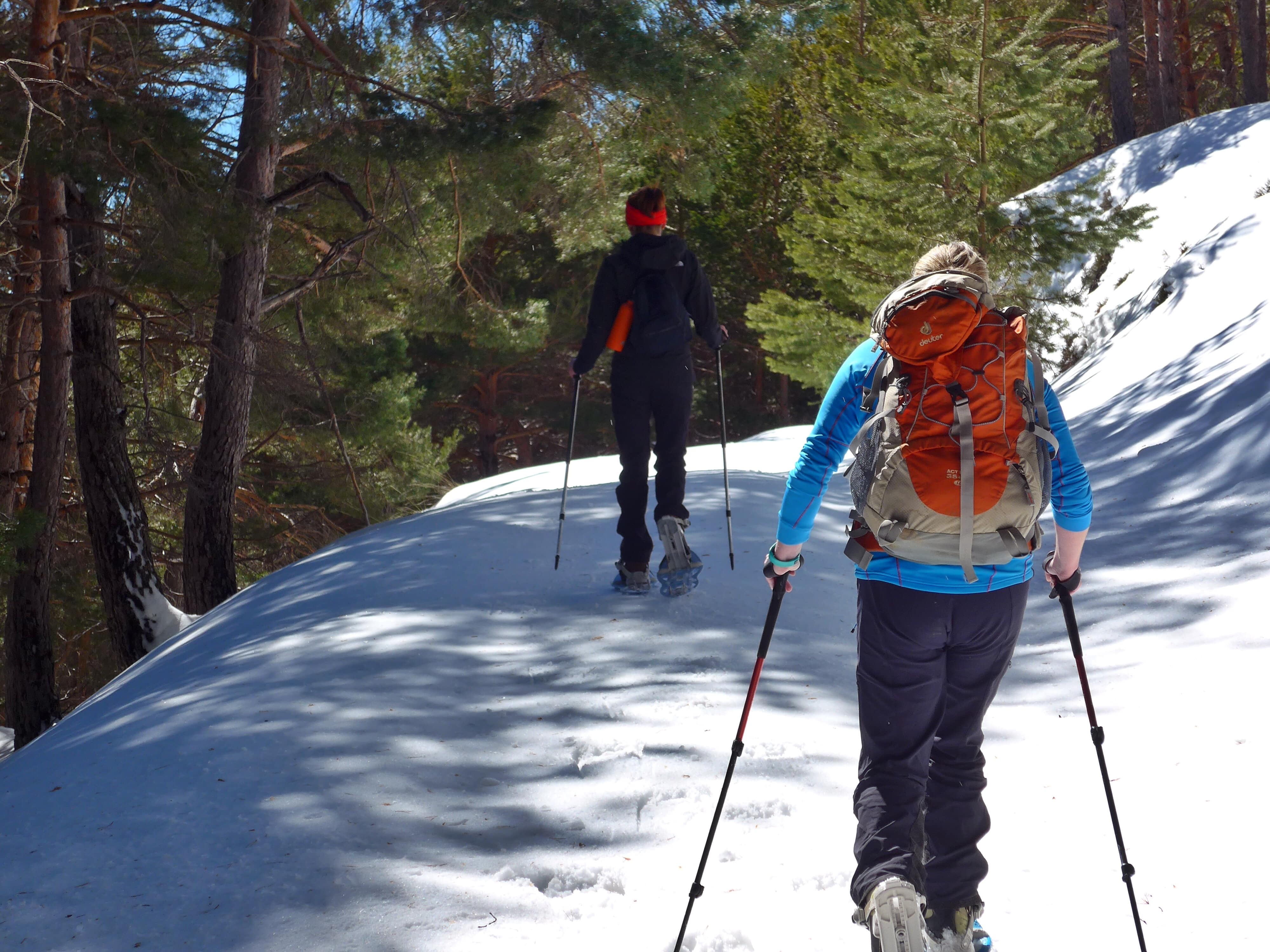 A day out in the snow
It was the first clear sunny day after a stormy and rainy week. The much needed rain finally came to the south of Spain and soaked the dry earth. Higher up, the mountain peaks got a pristine white snow coating. It’s February, and the snow came late this season. Snow usually melts quickly here on the southern slopes and everything that fell lower down had already disappeared in the warm rays of the sun but you could see that higher up there was still plenty for a fun day out.

On a gorgeous day with plenty of sunshine and incredibly blue skies, we set off to La Piuca, part of the Las Alegas mountain that’s easily reached by car. Less than an hour later we parked and found ourselves in different world: we had arrived in winter wonderland. At above 2000m the snow was pure white and untouched and the pine trees a beautiful deep green. It was tranquil and except for the cow bells in the distance you felt enveloped in the silence. It was meditative and humbling just standing there in the overwhelming presence of nature.

Snow shoeing through the forest
We tested the snow, and in some places we sunk in to our hips. So there wasn’t a chance of walking through here without snow shoes. Last year I had my first experience walking with these ‘clip-on shoe extensions’. They’re fun and you get used to walking with them quickly. For me the real beauty is that you can walk anywhere without having to stick to any trails or paths. So we set off in a gorgeous snow covered gully for an off-roading adventure. We were all mesmerised by the beauty of the area we were walking through. Traversing the pine forest on a carpet of white snow while being sheltered from winds, we soon had to take off our hats, jackets and jumpers. As soon as we came out of the forest into the higher mountains, the wind picked up and we quickly put our jumpers, jackets, hats and gloves on. Even though the sun was out in all its force, it is incredible what a difference the wind can make.

A sheltered lunch with a fresh mountain spring nearby
We crossed the windy ridge and dropped down on the other side towards an old refugio. These refugios are mountain shelters, built to home the workers that (re)planted forests in the fifties and sixties in Spain. The last leg towards the shelter was steep and so we decided not to walk but to slide down to our lunch spot instead. Fabulous fun!

We rest in the sun in a sheltered spot with the most incredible views. We overlook the dam far below and its artificial lake, further south is the white village of Salobreña perched above the sea. The Mediterranean Sea shimmers in the sun and is edged on the south by the mountains of North Africa. We feel like we’re having lunch on top of the world.

There is a fresh mountain spring close by with beautiful clear water. What a gem to find this and the water tastes absolutely great and clean. We fill up our water bottles and prepare to head back.

Sliding home
Just before we reach the pine forest, we find ourselves on top of a ridge looking down. We quickly exchange looks and smiles. Before us is a long and gently sloping gully, filled with snow. Why walk when you can slide? We take our snow shoes off, attach them to our back packs and we all slide down into the forest.

In the forest the snow is deep and even with snow shoes on you sometimes sink in till your knees. We arrive back at the car, tired and satisfied. It feels like we stepped out of civilisation for a day and reconnected with nature and ourselves.